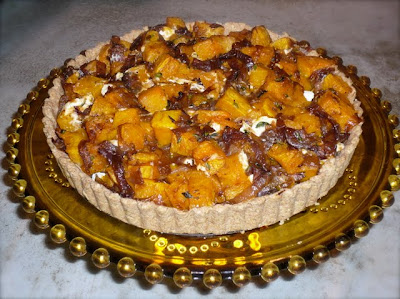 I brought this to bookclub last time we met and it was well received.
Realize before making this that it will take you a bit of time, but a worthy endeavor it shall be. Make sure you read the recipe clear through so you get an idea of all the steps first.
I'm thinking that if you can plan your meals ahead and carmelize a bunch of onions a day before making this, it'd take a load off the time involved in making this the day of. Also, if you can find it (I couldn't), it'd be well worth the money spent in buying pre-cut butternut squash for this! Those can be real boogers to take down.
The crust for this would be wonderful in any number of savory dishes. Really great, not too unhealthy, and super easy/foolproof. Right up my alley, as I have NO skillz in the pastry making department.

Pre-heat oven to 325 degrees Fahrenheit.
Pulse oats in a food processor until coarsely ground, place in a bowl with flour, salt and baking powder, mix well. Melt butter (if using) in a small sauce pan over medium heat, add olive oil and brush a little into a 9 inch tart pan with a removable bottom, pour the rest into oat-flour mixture. Mix with a fork until all the butter and oil is combined, drizzle in milk/water and mix until pastry holds together, it shouldn’t be too wet. Press crust into tart pan and pre-bake for 20 minutes, remove from oven and set aside.

Place onions and 2 tablespoons of the olive oil into a wide skillet or frying pan and cook over medium-high heat, stirring every few minutes until they begin to brown, about 10 minutes. Lower heat to medium-low and cook until caramalized, this takes a good 30 minutes, if they begin to stick turn heat down a little. Stir in a large pinch of sea salt and the balsamic vinegar, cook another few minutes. Remove from heat and set aside. (I usually add a small touch of agave nectar when I add the balsamic, and I do add a pinch of salt when first adding the onions to the pan)

Raise oven temperature to 375 degrees.
Cut squash into 3/4 inches chunks, spread on a baking sheet lined with parchment paper, drizzle with remaining olive oil, a large pinch of sea salt and pepper, toss well. Roast for 30 to 35 minutes or until golden brown, remove from oven and set aside to cool. In a large bowl combine caramelized onions, roasted squash and thyme leaves. Crumble half of the goat cheese into the bowl and gently toss. Crumble remaining goat cheese over the bottom of the pre-baked tart shell, top with squash mixture and return to oven for another 20 minutes until goat cheese is golden and slightly melted. Allow to cool before serving. 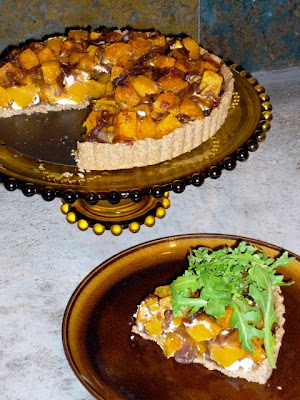 Posted by Erndog at 5:50 AM No comments: 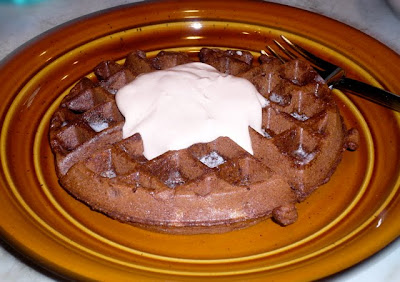 I discovered a wonderful blog by Amy Chaplin called Coconut and Quinoa in a search for a waffle recipe that included nut meal and cocoa. This recipe was my jumping off point. I do hope to make it as written someday, but this morning I was fulfilling a long ago made request for chocolate waffles. I've made Amy's Roasted Squash, Carmelized Onion and Goat Cheese Tart and it was to die for good. Hopefully, she'll let me repost the recipe...although truth be told, it's looking at her photos that will convince you to make it.
Ok, back to the waffles. Nutella. So good. I had hazelnut meal in the fridge that needed using up, so thought immediately of pairing it with cocoa. I've left the orange in from the original recipe for a more grown up flavor, but you could leave that out if it doesn't appeal (I SO wanted to spell that "appeel") to you. I stuck with a more neutral flavored oil instead of extra virgin olive oil, added some vanilla, and a bit of dried espresso to deepen the chocolate flavor all the more. To drive home the Nutella goodness, I mixed about 1 Tbs into some fat-free Greek yogurt to top the waffles.
True confession time now. I also mixed in homemade agave sweetened coconut cream. Decidedly not fat-free. Wow.

Topping:
Mix together-
(~1/4 cup Coconut cream...only because I had it, but man was this good!)
Greek yogurt
~1 Tbs Nutella
Agave nectar to taste 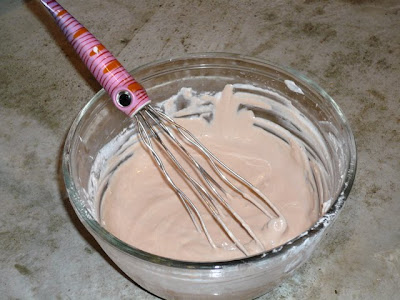 Brush heated waffle iron with oil and go forth and waffle! Cook waffles until little to no steam is coming out...we used a large Belgian waffle iron for this. Best eaten directly off the iron, but we did keep most of them warm in a low oven. Alas, they lose their crispness doing this. Delicious all the same. Top waffle with yogurt/Nutella/agave mixture....mmmmmmmm....
Posted by Erndog at 8:43 AM No comments: 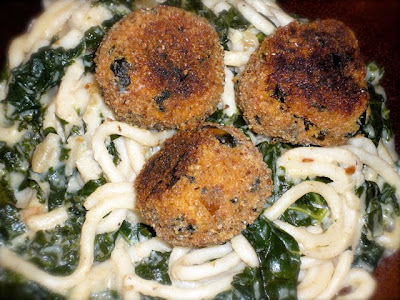 I was following a recipe when I began this one, after making the sweet potato kale mash I was a little unimpressed.
Knowing it should and could be better, I postponed this dinner until the next night after feeling a bit let down by the kale sweet potato mash I'd made. The original recipe was vegan. My version is still vegetarian, but with the added ricotta, Parmesan, a bit of egg, balsamic and nutmeg the balls were really super tasty. The original recipe served the balls with a tomato based pasta sauce. Well, I went to the trouble of making a fresh tomato sauce, but it just didn't feel right.
Popped that in the freezer and decided to go with an easy bechamel instead. Tossed in a whole bunch of braised kale and it was a stellar meal.

Now when I made this, I cooked the onions and kale for the balls separately from the onions and kale that went in the sauce. No reason to do this...so if you're making the whole meal just go ahead and cook the full amount of kale and onions together, then divide between the balls and sauce.

One more quick note...
If the Monster wasn't so opposed to pecans, I'd have included some chopped toasted pecan pieces in the balls for added texture.

Preheat oven to 400.
On a sheet pan, drizzle sweet potato pieces with some olive oil, salt and pepper. Toss to coat then roast for about 20-30 minutes, or until soft when poked with a fork. Remove from heat and set aside.

While potatoes are roasting, saute onions in about 2 tsp olive oil over medium heat. Add the onions and after about 5 minutes of cooking, reduce the heat to low. Stir about every 3 minutes until evenly browned.
Bring heat back to medium and add in minced garlic.
Cook garlic for ~1 minute, then add in kale, a pinch of red pepper flakes, and a pinch of salt. Saute until kale has cooked down a bit, then add a touch of veggie broth or water, reduce heat and cover. Cook for ~4 minutes or until kale is tender. Finish with balsamic vinegar. Remove from heat.

In a bowl, mash sweet potato pieces then add in kale and onion mixture.
Let it cool, before adding in part of an egg, ricotta, and Parm.
Add salt, pepper, and a touch of fresh ground nutmeg to taste.
Roll mixture into 1 inch balls, then roll them in bread crumbs.
Place on and olive oiled baking sheet (I spritzed the balls with a bit of canola cooking spray on tops) and bake for 25-30 minutes, flipping them over after 15 minutes.
Let cool a bit, then serve.

Heat ~1 Tbs olive oil a large skillet or Dutch oven over med-high heat.
Saute onion for about 5 minutes.
Add kale, a pinch of salt and toss to coat, cook down for about 1-2 minutes.
Add ~1/3 cup veggie broth, cover and reduce heat to low.
Braise for ~7+ minutes, or until tender.
Add a touch of balsamic and anything else you feel it needs...more salt, some pepper (black and or red pepper flakes).
Remove from heat and set aside.

Heat milk in a glass measuring cup in microwave until steaming, but not boiling (take care not to scald it.
In a sauce pan, heat butter til foamy over med. heat.
Add flour and stir, cooking for several minutes.
Slowly add in heated milk, whisking all the while.
Cook over med. low heat until thickened.
Add in spices to your taste. Stir in Parm if using.
Stir in kale and onion mixture and cooked spaghetti noodles, tossing to coat.

If you've made the sweet potato kale balls too, serve with them on top of the sketti.
Wow...kind of seemed like a lot of work, but it was worth it! I'm sure this will go faster the next time. Now that I know what I'm doing! :-)
Posted by Erndog at 7:28 AM 4 comments:

I thought it might be a good idea to list the meals I'm making on a daily basis online. One, so I can remember what we've enjoyed serving together for quick reference later, and two, for any friends and family who might want the recipes. Most of the foods I make are pretty simple and fairly nutritious...although I'm noticing some desserts have crept into my menu plans lately!